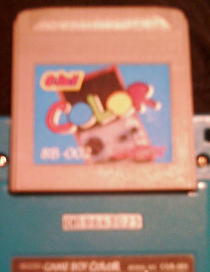 by Sachen
multicart, but legit!
for one or two players


Sachen have brought out a fair few games for NES and Gameboy, and at one point even made efforts towards their own handheld system - Mega Duck, I believe. Go ask the internet. In this case, they've released a few 8-in-1 carts for the Game Boy Colour, and I have one of them.

A note about the picture, that's my actual cart and my actual screen-scratched-to-buggery Game Boy Colour, taken with my actual $10 clearance Chinese digital video camera, Polaroid branded even, with it's fantastic HD quality snapshots combined with my auteur level photographical skills. Be glad I didn't use the in game shots I tried taking.

The titles are the names given on the startup menu screen (which has "8 in 1 Color" title, the list of eight games and a pointer to the one you want to start, and (c) 1999 Sachen at the bottom). The "color" is cycling various colours while you're on the menu, and as far as I can tell, that's about the most "color" you get out of any of the games - all the games in play just look like regular GB games with the GBC palette enhancement, at least on my GBC. The games on this particular 8 in 1 are as follows:

This game is a rather difficult to play clone of Galaxian. What makes it difficult is that you can have two shots on the screen at once, great, but so can the bad guys, and they love acute angles. Good luck trying to dodge half the crap coming at you. At one point I saw a mother ship type thing fly across the top of the screen, but had no chance of hitting it. Who knows if it gives you an extra weapon or points or the location of Jimmy Hoffa's corpse? The best aspect of this game is that it plays a few bars of "Land of Hope and Glory" as Game Over music, and a few bars of "The Stars And Stripes Forever" when you start. Does this mean you're a courageous Yankee fighting off the evil Redcoat viruses?

This game's actually interesting - it's an advancement on the game "Battle City", a mainstay of most bootleg multicarts. This version, you're running around a 'futuristic' maze that looks like a circuit board covered in ICs you can shoot out of the way (the equivalent of the walls in "Battle City', and you have to take out enemy tanks to protect a CPU at the bottom (ie the base). If you own goal your base, it's instant game over, no matter how many lives you have, complete with "GAME OVER - YOUR MISSION IS DEFEATED" message.
Each level you have multiple enemy types to off. Killing a boss type guy has different effects - first time I shot one, it froze all the other enemies for a length of time, the second time, it brought up a "B" icon that blew up all the tanks on screen. The map is larger than the screen, so you're a'scrolling a lot, and there's a bar chart of stars along the bottom showing you how many more enemies are left to clear the level. The enemy tanks spawn in out of nowhere, but in the few times I've played it, I've yet to be killed cheaply, but I bet that's more luck than programming. Guess what's back? "The Stars and Stripes Forever" and "Land of Hope and Glory", baby.

All sorts of public domain music in this bad boy. The title screen music is a jaunty remix of "The Battle Hymn of the Republic", and you can choose from one of three standards in game. I'm guessing Sachen programmers had the ability to transcribe music and not a whole hell of a lot of inspiration (or budget?) to compose new stuff.
This game is a Tetris variation - this time you have two linked blocks that drop at a time - both with a number on them between one and six. The blocks are one across and two high, and you can only change the order of the two numbers as the block falls. The "well" is six blocks wide and 8 tall. How do you clear blocks? Get three of the same numbers in a row either horizontally, vertically or diagonally (or more than three if you're a skillful son of a gun).
You can also remove straights of four blocks - 4-3-2-1 or 3-4-5-6, etc, you get the idea. There may be other combinations, but I've yet to find them. It's not a bad game for what it is, really, unless you're sick to death of Tetris type puzzles. At least this one is relatively short lived.. AND you get three different public domain marches to annoy you in the background. Unfortunately, none of them are "The Stars and Stripes Forever". A final point - do you think maybe this game was meant to be called "Dice Block"? Good work, Sachen.

Starting "Dice Block" brings up the title screen for "Dice Square", along with an even jauntier remix of a classic march, complete with whistling and chirping noises.. of course, the whole loop is only about 10 seconds long, so you'll get over it very, very quickly.
This game actually has a password option, so after you spend an hour moving around the grid completing a level, you don't have to relive that particular pain again. You still have the pain of the endlessly repeating music, though - what is it with Sachen and marches?
I'd like to tell you what the gameplay involves, but it's frustrating and tedious. The first level is a grid nine squares across by seven down taking up the vast majority of the screen, and there's five dice with One and Two dots on them placed in various positions. You control a red arrow (hey, colour!), and can use it to move the blocks around, but you can only move one square at a time. There doesn't seem to be a move limit, but there is a rather generous overall timer in the top right corner. Kludgy movement aside, multiple attempts haven't helped me in working out the goal of this awful puzzle game.
OK, so a third attempt (yes, I'm thorough) seems to indicate you need to push a lower denomination into the next one up to destroy it, so that you only have ones left... maybe? The second screen has one, two and three dice, and a static monster. Experimentation, especially given the cacophonous public domain tune (which changed from the first level, but not for the better) didn't lead to any further enlightenment. Pity this cart didn't come with the manual, I'm sure it would've been helpful and thorough.

Half hoping this would have something to do with haemmorhoids and "Land of Hope and Glory", it just turned out to be a bog standard Sokoban clone with tiny graphics so it can have relatively complex levels on a single screen. If you're not familiar, it's the "move the boxes around the warehouse onto specific spots without getting stuck" game.

"Snake Roy: Trouser Warrior" as I don't particularly like to call it is a rather jazzed up version of the classic "Snake" game. Pressing start actually shows a cut scene of a witch walking a castle hall incredibly slowly up to King Roy himself, threatening him, then zapping him into a... snake. Snake Roy! It's good to be the king.
Once you watch the rather entertaining cut scene, the individual levels start, and it's much the same shenanigans as usual for a snake game - move around the screen eating blobs, your snake extends each time you eat one, and if you cross yourself, you're dead. There's also a specific exit door that opens which you have to reach to end a level once you eat the blobs, and there's coins to pick up and power ups, such as a "S" which shortens King Roy a bit. Short-dicked by Sachen, that's how they come at King Roy. Later stages include wall obstacles in various patterns, more coins, etc. It's fun enough, probably one of the better games on here.

Actually "Puppet Knight" on the title screen, this here is a complete, utter and total ripoff of Bomberman. Instead of a cool lookin' Bomber dude, you're a .. err.. pupper knight. The level is bigger than the screen, but the entire screen real estate is taken up by the playing field, which is nice. It's Bomberman, what're ya gonna do? Perhaps a little fast, but I suck royally at Bomberman, so what do I know? Bomberman's one of those very few franchises where I'm lousy at it, but love it anyway.

Actually "Suleiman's Treasure", but I'll let that one slide because there's only so much room for a title on a single line of menu. Nice picture of pyramids and a Sphinx on the title screen. You even get a vaguely Egyptian sounding song, too. Pity, I'm starting to miss "The Stars and Stripes Forever".
The game itself is a single screen clone of the arcade game "Anteater". You're essentially playing another snake moving around a single screen maze eating dots and avoiding creatures, or trying to eat them. Moving the gamepad moves the snake head forward, and pressing A makes him retreat. It's pretty difficult, but then I was never a fan of the arcade game either.
A single set of scores is kinda pointless for eight different games, and I can't be arsed to do eight independent sets of scores for the individual games, so let's just average it out: Graphics 5
Sound 3, +2 if you believe awful and/or ridiculously misused music has entertainment value.
Playability 5

Isn't that meaningful? Thought so.
back